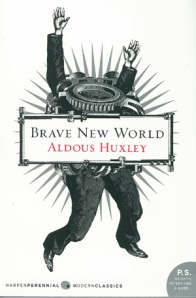 Damn, Shepherd Fairey has been around forever!

HAVING never had to read them in High School, I recently finished George Orwell’s 1984 and Aldous Huxley’s Brave New World for the very first time. While I deeply enjoyed both, and although, in a post Cold-War world, I believe BNW to be more relevant today, I come out being more impressed with Orwell. Both for the intensity of the writing and for the sheer philosophical achievement it represents, 1984 might be the best book I’ve ever read.

1984 is popularly understood as a novel “about” totalitarianism. In truth, Orwell’s masterpiece goes much further than simply describing totalitarianism; it examines it, defines it, predicts what it is, what it wants, and how it must behave, all to an extraordinary degree. In 1984, George Orwell invents totalitarianism.

Nowhere is this more apparent than in Orwell’s ability to “speak” totalitarianism, and nowhere is it spoken more effectively than when the subject turns to sex. There is one particular scene where the protagonist, Winston Smith, discusses sex with his girlfriend, Julia. They are lying side-by-side (and after-the-fact) when this memorable exchange occurs:

Winston: Look, I hate purity. Hate goodness. I don’t want virtue to exist anywhere. I want everyone corrupt.
Julia: Well, I ought to suit you, then. I’m corrupt to the core.
Winston: Do you like doing this? I don’t mean just me…
Julia: I adore it.

The exchange is memorable because English society has become dominated by a culture of extreme sexual repression, whereby teenagers are forcibly enrolled into the militant “Junior Anti-Sex League” and where Winston’s wife refers to having sex as fulfilling her “duty to the party”, and not in the swingers-kind-of-way either. The totalitarian society is one in which the primitive preoccupation with “purity” becomes a national obsession, and where sex (of course) is seen as purity’s natural enemy. The State is your only acceptable lover, and she is a jealous one. By hating purity, and by loving promiscuity–going so far as to fantasize about Julia sleeping with great numbers of men–Winston is hating totalitarianism and loving whatever its opposite might be.

In Brave New World, Huxley’s view towards sex is completely opposite to that of Orwell’s. BNW imagines a future England which is no less totalitarian, but instead of being forced into submission by the boot and the truncheon, society is “bred” into order using genetics, and harmony is maintained using narcotics and sex. Instead of extreme repression, England becomes dominated by extreme promiscuity: children are taught sex games, monogamy is considered unnatural, and everyone gets through the day by masturbating (“Vibro-Vacuum massage”, going to the “feelies”) and by getting wasted (off of a euphoric, hallucinogenic, hangover-free trip called “Soma”). Books no longer exist really, as all entertainment has devolved into cheap variations on visual and physical stimulus. Human society has dedicated itself to eliminating anything which might cause “pain”, and in doing so also eliminates all that which causes love, beauty, and maturity.

The hero, if he can be called that, is John the Savage. While pregnant, John’s mother was abandoned by her lover during a vacation to “Malpais”, a reservation of primitive humans located, hilariously enough, in New Mexico. Growing up, John’s only reading material happens to be one of the few surviving copies of The Complete Works of William Shakespeare. John is thus obsessed with morality, virtue, and honor. And abstinence. John escapes the reservation and is disgusted by the soullessness of the Brave New World around him. When a woman, Lelina, advances on him, the pressure eventually drives John mad.

What’s impressive is how both works could be so different, yet so prophetic.  For example, 1984 was published the very same year the North Korean state was founded. Christopher Hitchens, who has written a biography of George Orwell, once said the similarities between the nightmarish world of 1984‘s “Oceania” and the Democratic People’s Republic of North Korea are so great “its as though somebody handed Kim Il-Sung a copy back in 1948 and asked ‘do you think we can do this here?’ And he responded ‘we can sure try'”.

In the same setting, Hitchens commented that 1984, the quintessential Cold War novel, will remain relevant because it speaks to a timeless human flaw: the will to obey. The continued relevance Brave New World needs no explanation.