Now what do you do?

After decades of gradual fee increases, the latest ‘deal’ struck by the UC regents to raise fees an unprecedented 32% has finally crossed the line. A world class education–essential for the success of yourself, your state, and your nation–is slipping away from California’s social contract.

Since realizing the inevitable last fall, you’ve walked-out, sat-in, and spoken-up. The outrage–real outrage–on UC, CSU, and Community College campuses is palpable. In fact, your reaction has received global media coverage. Of your massive protests last September, the UK Guardian first wrote of the “shock” it sent throughout the capitol, and then it described the students and faculty as “meaning business.”

So the die has been cast. The state of California has crossed the rubicon. Sacramento wants your education back.

What do you do?

You’ve blamed the UC Regents and the CSU Board of Trustees–suspicious of how readily they accepted the cuts and questioning of their compensation, you want answers. You’ve blamed the governor–for heaping the fallout of California’s colossal dysfunction onto the shoulders of its children, and for seeming aloof from the plight of California’s students. You’ve blamed the state legislature–for doing its best to undermine your education, and for allowing nearly every other function of the state to grind to a halt on its watch.

But something about these enemies doesn’t stick.

The regents and the trustees are only reacting to what’s coming down on them from the State Capitol, and their compensation alone doesn’t come close to closing the hole.

The Governor too is hamstrung. Even in good economic times, he and the legislature only control about 20% of the budget. The rest is ‘locked-in’ by the spending priorities and restrictions by the political movements of yesterday.

The legislature is a tempting target…but wait. Fees have increased during periods of Republican control and Democratic control; when liberals were in charge of the legislature and when conservatives were in charge; in good economic times and bad. You have every reason to believe that you will continue to receive less education for more money no matter who wins what election where or when.

No, the fee hikes, the layoffs, and the furloughs (like the IOU’s, the prisons, and the water) are bigger than Arnold Schwarzenegger, and they are certainly bigger than either the regents or the board of trustees. For this reason, you and your fellow students have been visibly frustrated trying to find the right target for your wrath, the most effective avenue for your collective action.

Should you look to Sacramento? Today, at this very moment, the Capitol exists in a state of controlled-anarchy. Every lobbying firm and every interest group scavenges whatever it can from the public body; the feast has no strategy, no master plan, and no guiding principle. The beast has shown itself capable of devouring water systems, prison systems, roads, bridges, and the social safety net, and now its hungry for the greatest university system in the history of our species. The monster cannot be tamed or captured, and its gluttony is ravaging us all.

What do you do? When who controls the legislature or the governor’s mansion has largely ceased to matter, and when the system and all its parts has become so fundamentally committed to destroying everything you love–from your parks to your health to your education–where do you turn? Do you tinker around the edges? No. You get a new system.

Last month, a coalition of advocacy groups called Repair California, finalized and submitted two ballot measures to do just that, by calling California’s first constitutional convention in 130 years. If the measures succeed at the ballot we would be enabled to scrap the old system and build a new one, one that learns from other states and reflects the California of tomorrow. No other reform proposal offers such an opportunity, not even close.

I don’t know about you, but I refuse to accept the status quo and what it’s doing to us. It’s time for us to seize our future. California needs you. This movement needs you. Visit http://www.RepairCalifornia.org.

AS Californians begin demanding fundamental reforms to their state government, business-as-usual hunkers for a fight.

Benjamin Franklin was said to have quipped that doing the same thing repeatedly and expecting a different result was the definition of insanity. Dr. Franklin, welcome to Sacramento. Where despite the shame, humiliation, and human suffering caused by California’s horrific budget catastrophe, proponents of doing the same thing have unleashed a campaign of fear against convening a Constitutional Convention, and in doing so have rushed to the defense of the status quo.

In a June 18 Op-Ed appearing in the Capitol Weekly, a union official representing the State Building & Construction Trades Council essentially called on Californians to fear their neighbors.

“Think about the person you know – a relative, friend, neighbor, colleague – whom you disagree with the most. That person may well be in a jury pool and could be selected. Is that the person you want spending the next several months…deciding how California should be run?”

This is not an argument against a Constitutional Convention, its an attack on the entire pantheon of American values, from trial by jury to universal suffrage.

And yet, this is only slightly more hysterical than the rationale given by a coalition of 6 taxpayer groups opposing a Constitutional Convention because of “fears that the process can and will be hijacked” by special interests, oblivious to the fact that special interests rule the entire roost right now.

While it is clear that those on the far-left and far-right fear a Constitutional Convention, and believe you should fear one too, their rationale is not so clear. For example, are they afraid that citizen guided reforms will make California’s schools the worst in the nation? They already are. Do they fear pan-generational neglect of our water infrastructure? That has already happened. Are they afraid that millions of poor children will suddenly go without healthcare? We’re already there. That our beloved state parks will close? That our prisons overflow? Done and done.

Just last week a colleague of mine gave a teary-eyed account of the real cost of the ruined California government. Driving with his two small children, they passed a elementary school weighted down with chains and shackles. The marquis read:

“Sorry, no summer school. Budget cuts. Have a great summer.”

As we approach the moment of truth, we expect the fear mongering will only increase. This is unfortunate because history teaches us that when you give citizens the responsibility to reform their government, the American people rarely disappoint.

When Illinois voters called for a Convention in 1968, delegates drafted a short document that established basic rights, established the “Home Rule” principle that gave cities and counties more control over their own resources, and created what is all-around considered to be a model constitution.

Likewise, Michigan held a Constitutional Convention in 1963 that brought it into the modern era. Hawaii alone has convened two Con Cons since 1960. All told, there have been 232 State Con Cons in US history. In each of these and other states, Constitutional Conventions are regularly debated on the merits of the moment and by the facts on the ground, not by fear, mistrust, and misinformation.

During the 1963 Michigan Con Con Wayne State teamed up with Michigan State University to produce what has since become a classic black and white documentary about American democracy. At the closing moments of “Michigan Can Lead the Way”, the narrator summarizes the experiment:

“Perfection is never an outcome of human enterprise. There had been fears the convention would be too conservative; fears that it would be too liberal; fears that it would be racked by politics…Pro-labor or pro-farmer or pro-business…Favoring the present, trapped in the past, lost in the future. The convention had been all of these, it was not an assemblage of angels. It was a convention of men and women. Taking the best it could agree on for our time and for our people…This was the process. Sometimes calm, sometimes not so calm. Either way, it was the people’s way. It was the way of a free democracy.”

For California, doing nothing and expecting different results is the worst option of all. And defending the status quo is not only scary, it’s insane. 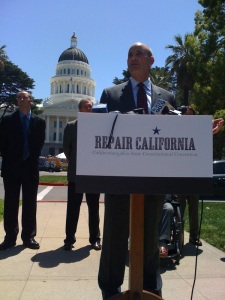 “The current system neither has nor deserves advocates.”

-James Madison on the US Government under the Articles of Confederation

On Wednesday, May 19, concerned citizens from across the state formally unveiled a plan to repair California’s broken system of government by calling for a State Constitutional Convention. Since the announcement, our in-box and website have been flooded with support from across the political spectrum and the campaign has received valuable, high-profile media coverage.

The effort was on the front page of the New York Times, was given an official endorsement of the Los Angeles Times, and thanks to some intrepid bloggers, we found out that almost all of the candidates for Governor have endorsed the Constitutional Convention. (This follows a great story in The Economist, which was published in more than 200 countries)

Last week’s press conference brought together a politically diverse group of supporters to call for fundamental reform. A special thanks to Democratic State Senator Mark DeSaulnier and Republican Assemblyman Brian Nestande, who agreed to try to place two propositions on the ballot through the power of the legislature. While they have a near impossible task, we all appreciate their patriotism. If they are unable to succeed, we will use the initiative process to convene a Constitutional Convention.

If you have not already done so, be sure to visit our newly revamped website at www.RepairCalifornia.org . There, you can locate events near you, access multimedia, host a meeting, and view recent media coverage. In addition, you can also join our ever-growing facebook cause, Repair California: Call a State Constitutional Convention. There, you can contact and share ideas with other supporters, comment on popular threads, and suggest links. Be sure to invite your freinds to help this campaign go viral.

Again, this campaign would not be possible without the dedication and concern of regular Californians. Check often for updates, and stay-tuned for further notices on this historic campaign.